Yasmin turns 48 today, just as beautiful as she was when she first caught the public’s eye over 20 years ago.

Enjoy today’s birthday update and groove to Duran Duran’s Come Undone (Simon wrote the lyrics as a birthday gift to her), as performed live in Los Angeles last year and directed by surrealistic cinematic legend by David Lynch.

Yasmin has one photo in the November 2012 issue of Vogue Paris, in a feature on models of every age.

Thanks to Mat Cyruss @ The Fashion Spot for sharing.

Thanks to my friend Denisse @ Amber Le Bon’s unofficial site for these full-size preview images of Yasmin’s latest cover and editorial.

Yasmin is on the cover of the November 2012 issue of Marie Claire Russia, shot by Alan Gelati and styled by Alyona Isaeva.  She is also featured in a 8-page editorial titled “City Chic.”  Purchase a digital issue here (the site is in Russian).

Thanks to Marie Claire Russia’s Facebook and Zinio for these previews. 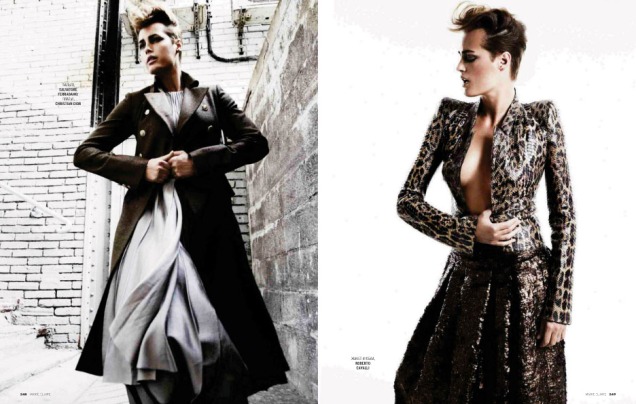 Last week, Yasmin attended the private viewing party for The Little Black Jacket, an exhibition held at London’s Saatchi Gallery featuring over 100 photographs that show off the versatility and timelessness of the classic Chanel black jacket.  While many guests chose to wear Chanel to the event, Yasmin went against the grain with her vibrant, attention-getting dress from Christopher Kane’s fall collection that made her stand out from the crowd.

She spoke of the power of the wardrobe staple in an interview with British Harper’s Bazaar: “I suppose it’s a kind of armour in a way.  When you put a jacket on that’s well-fitted and well-made, you just feel like you can tackle anything I think.”

Yasmin has been a favourite model of Chanel and Karl Lagerfeld for many years, from 1985 when she was the face of Lagerfeld’s autumn/winter collection to today – she most recently appeared in the Chanel Métiers d’Art pre-fall 2012 show.

The Little Black Jacket exhibition will be open to the public at the Saatchi Gallery until November 4th, and the companion book will be out this autumn.

Yasmin is featured in an advertorial for L’Occitane in the November 2012 issue of British magazine Red.  In the accompanying article, she discusses how her skincare regime has changed as she has aged and shares her tips for staying young.

Photography by Heather Favell, who previously shot Yasmin for Elle Italy in 2000.

Many thanks to L’Occitane UK for providing these images on Facebook.