As ambassador to BLUE Marine Foundation, Yasmin is committed to helping resolve the largest solvable problem on earth: the crisis in the world’s ocean.

In conjunction with this year’s World Oceans Day on June 8th, Yasmin has participated in a three minute long video, produced in partnership with Crème de la Mer UK and Ireland and the BLUE Marine Foundation, in which she calls upon us to recognize the significance of the ocean in our daily lives and why we should make its protection a priority.

Over half the oxygen we breathe comes from the ocean.  That’s every second breath we take.

The ocean’s future is our future.  But irresponsible human activity is destroying the very life that sustains us.

Now more than ever, the ocean needs our help.  The BLUE Marine Foundation is committed to protecting this most precious resource.  It needs your support.  Together, we have a real chance to solve the global crisis in the ocean and breathe life back into the sea.


To learn more about this important cause and how you can help, visit BLUE Marine Foundation.

Yasmin has been photographed with Michael Kors by legendary photographer David Bailey for the July issue of British Vogue.  It was taken at last month’s Vogue Festival, where she interviewed the designer and they reminisced about their many years in fashion.  (Want to see it?  Go to Vogue’s YouTube channel.)

Amaaazing!
photographer: David Bailey
credit to Mat_Cyruss @ The Fashion Spot for the image

This intense 3 day rally that runs a thousand mile (1600 km) route through scenic Italy from Brescia to Rome and back is open to some of the most spectacular classic cars produced between 1927 and 1957.  David and Yasmin drove a 1950 Jaguar XK120 OTS as part of the Jaguar Heritage Racing team.

Yasmin was one of a small number of women drivers to participate in the Mille Miglia, which is predominantly run by men.

The day before the start of the race, the Jaguar team converged in Brescia for scrutineering to check over the cars and pose for a few photos, many of which David submitted to Vogue as part of his racing diary.

The Mille Miglia began on Thursday, May 16th in Brescia’s Piazza della Loggia with a downpour that doused David and Yasmin in their open convertible.  Thankfully, the sun had come back out by the time they began racing later that evening.

The second leg began on the morning of Friday, May 17th in the town of Ferrara with Yasmin at the wheel.

Somewhere between Ravenna and Gamboletta, the XK120 was run off into a ditch.  David told Vogue, “Wee accident caused by another Mille competitor. Yasmin, who was driving, did brilliantly, keeping us away from houses, trees and spectators!”  Thankfully, neither of them were hurt, though the car was damaged, particularly to the left front bumper and passenger door.  With the assistance of the Jaguar support crew, they were soon back en route.

The third and final leg began on the morning of Saturday, May 18th in Rome, where Yasmin and David paused to take some photos before recommencing their journey.

It was after 13 solid hours of driving that the Gandy/Le Bon team crossed the finish line in Brescia to place 169th overall.  Out of the 415 cars that began the race, only 340 completed.

What did they think of the experience?  David revealed to Vogue, “Both myself and Yasmin’s answers were exactly the same to the question ‘Would you do it again?’ Yes, we’d do it again tomorrow if we could. We laughed (a lot), we cried a little, hardly slept, have bruises and wind burn, but we made many new friends and have memories that we will never, ever forget.”

Congratulations to David and Yasmin for their impressive showing during the Mille Miglia!

Check out all the photos from the race on Yasmin’s official site (scroll to the bottom).

Showing her amazing versatility after over 30 years in the business, Yasmin models androgynous looks in the latest issue of German Vogue. 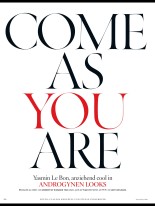 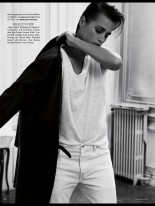 This weekend, Yasmin will be the co-pilot to David Gandy in the Mille Miglia, a three day long vintage car race that runs over a thousand miles through the Italian countryside from Brescia to Rome and back, in which they will be racing in a Jaguar XK120.  Best of luck to them both!